Noeleen Daniels, 29, from Lotus River, was among six women representing Local Football Assocations (LFAs) from across the city, in charge of games during the second round of league matches, at the Johnson Road Sports Complex, home of Rygate LFA, on Saturday.

Experienced at all levels of the game – from grassroots to the big leagues – Daniels has been involved with soccer for most of her life and has been a referee since the age of 14.

For Daniels and her fellow referees it was business as usual; all that mattered on the field was what the rule book said. She said the idea was to prepare them for the upcoming Sasol League and to encourage more women to become referees.

Saturday’s assignment was a coming home of sorts for the veteran referee, following a five-year hiatus from footballing activities.

Her timing couldn’t have been better as her return coincided with a provincial drive to get more women involved in refereeing, says Safa Cape Town’s head of referees, Zama Yokwana.

Yokwana, who serves on the provincial referees committee as a development officer, said it is part of a wider Safa Western Cape initiative to attract more women to become soccer officials.

However, Yokwana was quick to point out that although all soccer activities came to a halt in the past year, the committee never took a break throughout the lockdown period, continuing their work through online training and other methods.

“The idea is to ensure that there are more women on the field, taking charge at all levels,” said Yokwana, who had been a driving force behind the initiative since its inception.

Daniels says she’s been itching to get back in the game for a while and was happy to grab the opportunity when it came her way.

Raised in a soccer-mad family, Daniels, the eldest of three siblings, said her father Noel used to play for Milano United and her brothers Nolan and Nathan still play for the Cape District-affiliated Montague Spurs, the same club she used to play for.

Over the years she has accumulated all the necessary qualifications to officiate at all levels of the game.

“I also served on the PSL referees panel, one of only two women, 14 years after the first women was appointed to officiate in PSL matches,” said Daniels, a soccer coach and assistant teacher at Herschel Girls’ School, in Claremont.

“Whether male or female, you can do anything you put your mind to. These days there are so many opportunities for women in football. We have to make the circle of female referees bigger,” she said.

Originally from East London, Maleki, a member of the Crossroads Local Football Association, has been a referee since 2015 and obtained her Level 6 qualification in 2018, which enables her to perform duty at national level. She hopes to complete Level 7 shortly so she can perform international duty, if called upon.

Although taking charge of matches can be intimidating at times, she believes it’s all about managing situations.

“We’ve attended many workshops and training sessions where you learn how to control things on and off the field.

“Women are strong, they can handle anything. It’s a beautiful thing to see women growing and learning together. We must just support each other.”

Jody Johns, 25, from Kensington, and a member of Clyde-Pinelands’ regional womens’ league squad, said she got into refereeing in response to a request by her coach.

Although relatively new to the refereeing scene, Johns, a final-year hospitality student at CPUT has already earned her Level 3 qualification since staring out two years ago.

Johns was put to the test at the weekend during a game in which a coach questioned a decision she had made against his side, causing a bit of a raucous on the sidelines.

Although distracted, the young ref quickly composed herself and stuck to her decision.

“You have to make decisions, stand by it and get on with the game,” she said.

“You shouldn’t allow yourself to be distracted. If you tell yourself you’re strong and capable, you will be. At the end of the day it’s all about you and your attitude,” she said.

Childcare worker, Beverly Shumayo, 31, from Samora Machel, said she started refereeing in 2011 but was absent for a few years until making her return at the weekend.

Currently the only women referee at Rygate, Shumayo says she’d like to see that situation change in the very near future.

A former player for Red Eagles in Mfuleni and a member of the Ikamva Sport and Performing Arts initiative in Samora, Shumayo said she was introduced to refereeing by match officials whom she met at various venues they played at, including Rygate.

“I certainly would like more women to get involved, she said. Often men think that we don’t know the rules of the game, but we do,” she said.

As part of her own efforts to encourage youngsters, especially girls, to get involved in sporting activity, Shumayo runs a makeshift training centre at home.

“We don’t do basic sport in our neighbourhood. It’s important that we encourage our children to take part in sporting activities. Who knows, maybe some of them will become referees,” she said.

Participation in Safa Cape Town’s women’s referee programme is open to anyone, whether members of LFAs or not. Email zama.yokwana@gmail.com or info@safact.co.za or call Zama Yokwana on 072 421 8792. 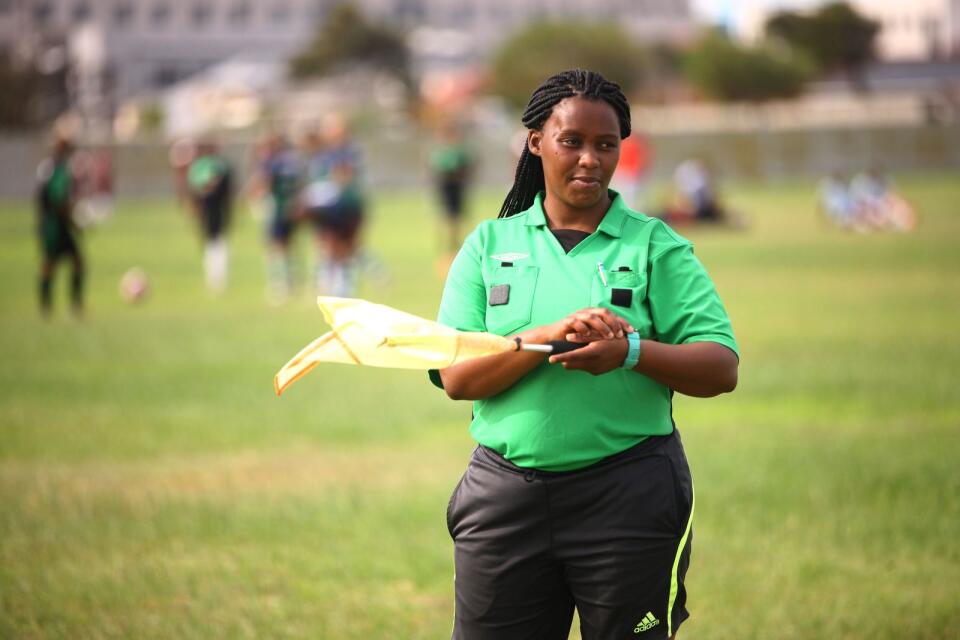 1/4: Rygate LFAs only women referee, Beverly Shumayo, says she’d like to see more women blowing the whistle on the pitch. 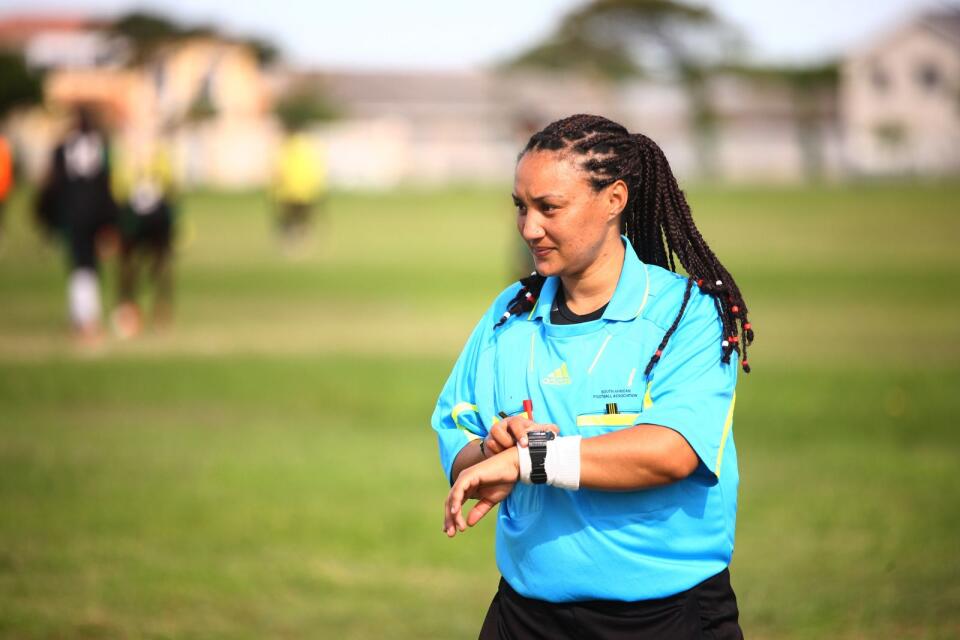 2/4: Noeleen Daniels, back on the block after a few years off the pitch.

3/4: Noeleen Daniels, back on the block after a few years off the pitch. 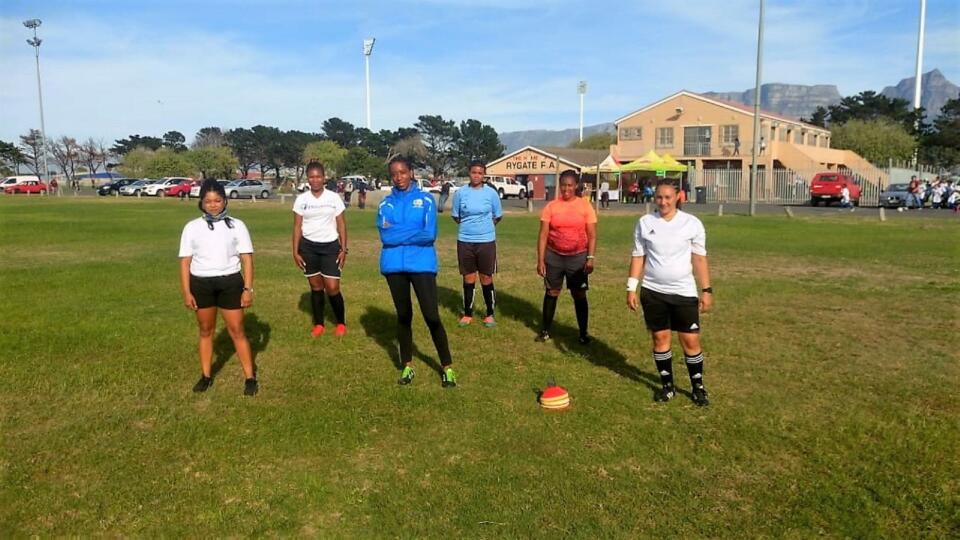